A Brief Guide and Overview Of The Colosseum Rome

The Colosseum in Rome is one of the Roman Empire’s most impressive buildings and it is one of the most famous structures in Rome today. The Colosseum was originally known as the Flavian Amphitheatre and was built on top of a park that had previously been built by Emperor Nero. The original park to which the Colosseum was built upon, had a large statue of Emperor Nero and when the Colosseum was built, the statue of Nero was allowed to stay and remained next to the theatre. The statue of Nero was known as the Colossus Statue and this is where the name of the ‘Colosseum’ originally derived from. Later in time during the middle ages, the name ‘Colossus’ was changed to ‘Colosseum’ and even today it is known as ‘il Colosseo’ in Italian.

Originally built as a gift to the Roman Citizens to help increase popularity towards the Flavian Dynasty and stage many events, The Colosseum in Rome became one of the world’s most iconic structures. Such is its gigantic stature it is now one of the first things people think of, when they speak about Rome.

Restoration Of The Colosseum

During the 16th & 17th Century, church officials sought a productive role for the Colosseum and had many different ideas as to how the Colosseum could be used and also how it could be made more productive. These ideas were later scrapped and instead, many Popes had restoration and stabilization projects initiated. Ironically, what they then didn’t realise was that those decision would actually make the Colosseum greatly in the future. If those restoration projects had not taken place many year ago, the Colosseum would certainly not have been as it is now in modern day life.

Throughout both the 19th and 20th Century the main face of the building has undergone repair and has been reinforced. There has also been major restoration which finished in the year 2000, which was designed to combat the effect of daily air pollution around the structure. 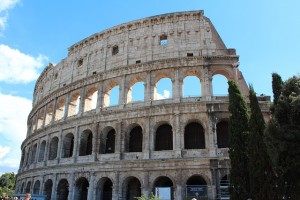 Today the Colosseum sadly stands in a ruinous state but even the ruins of the Colosseum are still an overwhelming and impressive sight. When you see the Colosseum in real life, you can only then imagine how great this structure once was.

Video Of The Colosseum In Rome And Its History

When Was The Colosseum Built

Construction of The Colosseum in Rome started in 72 AD and took 8 years to complete.

When Did The Colosseum Open

The Colosseum is believed to have opened in 80AD, 8 years after construction started.

Who Built The Colosseum

The Coloseeum was built by the founder of the Flavian Dynasty, Emperor Verpasian, hence why the Colosseum was originally named The Flavian Amphitheatre.

What Is The Colosseum Built From

What Was The Colosseum Used For

The Colosseum was mainly used for holding games and sporting events such a Gladiatorial contests but it did hold other events including animal hunts and displays, naval battles, theatrical shows, executions, ceremonies and mock battles. However, during its history, The Colosseum has not only been used for Games and Sporting events. After the Gladiator and Hunting events that took place in the Colosseum, it has also been used as a church, a cemetery and even used as a fortress.

When Was The First Games Held

It is believed that the first ever games was held at the Colosseum in 80AD and this was organised by Emperor Titus. The games are said to have ran for 100 days.

When Was The Last Ever Gladiatorial Games Held

How Much Could The Colosseum Hold

What Is The Height Of The Colosseum

The height of the Colosseum is approximately 48-50 metres high (187 feet).

How Wide Is The Colosseum

What Is The Length Of The Colosseum

What Is The Circumference

How Many Entrances Did The Colosseum Have

The Colosseum is believed to have had 80 entrance on the ground level and each one of these entrances were number. Spectators visiting the Colosseum would be given numbered pottery shards so that they could find the allocated seating area.

How Was Seating Allocated

Seating areas was allocated and divided by class and rank in society. The higher class members of society would be given the seating with the best vies.

Did The Colosseum Have A Roof

No, it was open but it did have an awning known as a velarium, which could be put up to protect the spectators from the blazing sun.

How Many People Could The Colosseum Hold

The actual number of people that the Colosseum could hold is not accurate but modern estimations put the capacity of The Colosseum around about 50,000.

What Was Underneath The Main Colosseum 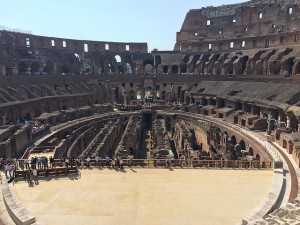 The area beneath the Colosseum was called the Hypogeum (which means underground). The Hypogeum had 80 vertical shafts which all provided instant access to the main arena area for animals and scenery.

Damage To The Colosseum

As we mentioned previously, the Colosseum now stands in a Ruinous state but throughout the years, the Colosseum has been damaged many times. Several earthquake throughout Rome led to both internal and external damage to the huge structure.

An earthquake in the 14th Century resulted in the outer walls collapsing and this can still be seen today where the Southern part of the wall is missing.

The Colosseum was struck by lightning which resulted in a fire destroying wooden segments of the interior.

It is hard to believe that in the Middle Ages structure and monuments such as the Colosseum were not as highly respected and maintained as they are today. This resulting in most of the fallen stone being used to build other projects like palaces, hospitals and churches. This form of neglect can been seen elsewhere throughout the colosseum.

What Is The Address Of The Colosseum

Getting To The Colosseum

Queues At The Colosseum

As you can imagine, The Colosseum is one of Rome’s most visited attractions and due to this, the queues and lines to get into the Colosseum can be long, especially in peak season. Even when you get inside the Colosseum and think you are at the front of the queue, you are not! the lines continue inside and these lines are just to buy the entrance tickets. There are several ways that you can avoid queuing in these lines and here are a few tips that will hopefully help reduce you waiting.

3. Book A Tour: Booking onto one of the tours, can be a great way to ensure you skip the line at the Colosseum but the down side of booking a guided tour for the Colosseum, is that it can be considerably more expensive that just buying the admission ticket. However, many of the tours (such as the Underground tour), give you much more access to the Colosseum.

Another alternative is to purchase the Roma Card which will allow you certain advatages for visiting the attractions, one of which is the Colosseum in Rome.