Rome is serviced by two International airports and the two airports in Rome are Fiumicino or ‘Leonardo da Vinci’ airport  and Ciampino airport. Passengers flying into either of the airports can access the city centre of Rome very easily. However, Rome also has a smaller airport know as Urbe airport.

As you can imagine, Rome is one of the most popular cities in Italy and has a large amount of travellers visiting it every year. Both airports can become very busy, especially during peak periods. As a result of this, both airports have a great ground support that provide transfers to and from Rome on a regular basis.

Both airport have a wide number of flights arriving and departing from the airport every day from a large number of different countries throughout the world. Many of the low cost airline now service the airports (especially Ciampino airport), which means that there are always cheap flights to be found throughout the year. If you are wanting to visit Rome, you should not have a problem reaching the city centre whichever airport you choose to fly into.

Getting To And From Airports In Rome 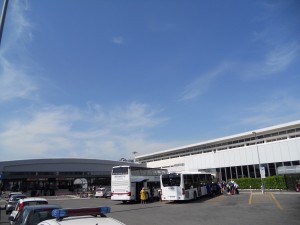 The ground supports at both the major airports in Rome are very good and passengers have a wide range of choice when it comes to transport for transfers. There is public transport at bot airports that offer a number of bus services to Rome itself and neighbouring towns and villages. Taxis operate from outside the airports but can be an expensive, especially if you are travelling alone.

Many coach operators run services to and from the airports in Rome on a regular basis throughout the day and most of the coach times are scheduled to coincide with the flight arrivals and departures at the airports. The coaches offer a very reliable and cost effective form of transfers to passengers and are an ideal option for passengers travelling alone.

Car hire is available to passengers arriving at the airports in Rome. There are several car hire companies located inside the airport buildings and there are some really good deals to be found on car rental from Rome airports. Car hire provides an ideal form of transfer to and from the airports and also means you have transport for the duration of your stay. Car hire can be a very cost effective option if there are several people in your party where the cost can be shared.

There are several companies that offer shuttle services from the airports in Rome. These companies offer both private and shared shuttles.

The Two Main Airports In Rome

Ciampino airport is the closest of the two airports to Rome itself but is also the smallest airport of the two and has just one terminal. Situated just 15 klms to the South of the city, Ciampino is a popular option with travellers. Ciampino airport is used by many of the low cost airlines and flights in to Ciampino can generally be found at reasonable prices. Ryanair is a major player with regards to airlines that service the airport and offers the majority off flights from a wide range of airports throughout Europe.

Ciampino airport has very limited facilities for passengers and only has the very basics in terms of shops, restaurants and bars.

Fiumicino airport also known as “Leonardo da Vinci airport” is the main airport that services Rome, although it is further from Rome centre than Ciampino airport. Fiumicino is located approximately 30 klms South West of the city but connection to Rome itself is very easy. Using one of the many transfer options, that connect passengers with Rome, makes the journey hassle free.

Fiumicino airport is one of the top ten busiest airports in Europe in terms of passenger traffic and has over 29 million passengers pass through the airport every single year. It has four terminals which are know as T1, T2, T3 and T5. The airport offers a free shuttle service that links passengers to different areas such as car parking.

Fiumicino airport has both Domestic and International flights arriving and departing at regular times throughout the day.

Passengers can catch buses from outside the airport arrivals terminal that drops of at several different locations in the city centre.

Urbe airport is a small civilian airport that is located in the North of the city. Urbe airport is situated inside the ring round that circles the city and is situated between Via Salaria and the Tiber River. When the airport was first opened in 1928, it was known a Lictor Airport until it was renamed Urbe Airport. It was once the main airport to service Rome until all the commercial flights were transferred to Ciampino airport. Urbe airport is known mainly used for light aircraft and is also home home to the flying club of Rome (Aeroclub di Roma). The civil aviation authority of Italy invested a large amount of money into the airport which allowed it to open a new terminal in 2010 which is now used for Helicopter flights.

No matter which of the two airports in Rome you choose to fly in to, reaching the city is very straight forward.